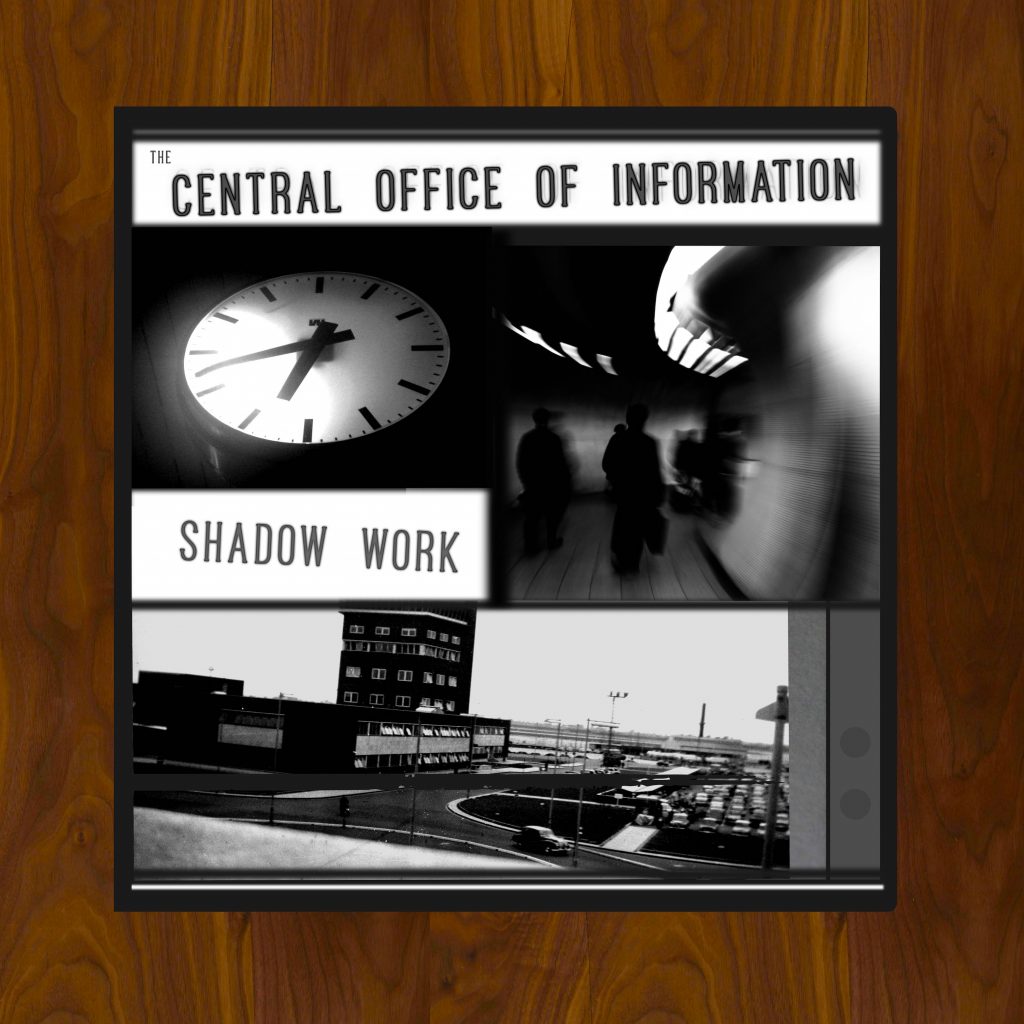 Shadow Work is Alex Cargill’s (The Central Office Of Information) debut solo album on Subexotic Records (although he is no stranger to the label, having previously released the co-written TV1 as Transient Visitor, as well as the split release Passing cars In The Rain with .hyacinth).

With previous titles on such highly prized cult labels as Castles In Space, Woodford Halse & Colander, Subexotic are delighted to get in on some COI action with this intriguing new chapter in Alex’s musical journey.

How would he describe the new album?
“Future-hauntism, haha. I always like to try and challenge myself if I can, so the aim this time was to try and maintain the core COI sound (hauntology, dark ambient, call it what you will), but to try and push the boundaries further than I had done before, by incorporating more digital elements and techniques. This one is also a bit more rhythmic than the previous albums, with slightly more emphasis on beats and percussion. Whereas the beats were fairly simple and sparse on albums such as 'The Central Office Of Information' and 'Treedom', this time they are (hopefully) a bit more interesting in terms of the textures used. Hardcore COI fans needn't worry though - there is still loads of woozy analog synth and some analog drum machine in there too..

A lot of these tracks came about from experimenting with the Modal Craft Synth 2.0 digital wavetable synthesizer which became the most recent addition to my studio back in the summer of 2020. As I mentioned earlier, there is more emphasis on digital elements on this album. Hopefully it works nicely alongside the analog sounds though. Also, this is the first COI album to feature guest vocalists (Bob Fischer and DJ Space Terrapin, both of whom are really lovely blokes). Bob's vocal sample came from an episode of my 'Hauntologist' podcast from 2020, in which I chatted to Bob about things such as his career and the whole hauntology thing. I realised later that this episode could be ripe for sampling, as Bob has such a nice voice and speaks so well. I didn't tell him that I was making the track, I just went ahead and did it and sent him the finished product to see what he thought. I had no idea whether he'd like it or whether he would threaten me with some sort of legal action. Thankfully, I think he liked it. The track with DJ Space Terrapin was originally produced for a compilation album, however I was so pleased with the end result that I decided to include it on 'Shadow Work' too, as I really wanted it to reach a larger audience if possible. The Terrapin is a lovely guy with such a distinctive voice and it was a real joy to get his own personal take on hauntology, from a German perspective. The track 'Things That Go Bump In The Night' was my original submission for the first 'Scarred For Life' compilation on Castles In Space, but it was considered to be a bit too minimal, so I produced another track to replace it. I was really fond of it though and didn't want it to go to waste, so it ended up on 'Shadow Work’.”

The album plays with several themes to engage the listener, including government and bureaucracy (Leaked Documents, Shadow Work, Skeleton Staff); the 'haunted' childhood of the late 20th century (On The Scene, Things That Go Bump In The Night, I Remember); the ever-increasing data records left behind by the dead in the internet age (Online Ghost); and the spaces we occupy (New Spaces, Isotropic Space). Shadow Work has a strong overall sense of its own neat efficiency, and yet things are eerily outmoded. Like thumbing through a waiting room magazine that lost its relevance a long time ago. Quite uncanny, very COI.

Shadow Work releases on 25th February 2022, and will be available on digital download, as well as a must-have ‘stationary cupboard’ black vinyl edition.